APPLY NOW!
By Brewery Finance on August 12, 2020 in Uncategorized

Since its start in 2010 — long before it was a topic in craft beer — Durham, North Carolina’s Fullsteam Brewery has had diversity on its mind. On the beer side, it crafts “distinctly Southern beer that celebrates the farm and food traditions of the American South.” It does so through fervent use of southern-grown ingredients and bright ideas, and the result is one of the most inventive, varied, and built-with-local-produce beer lists in America.

To meet its goal of welcoming Durham’s diverse population (roughly 50% white and 50% Black, Hispanic/Latino, Asian, Native American and other people of color), Fullsteam adheres to five values penned by founder Sean Lilly Wilson. These atypical brewery mantras include “seek truth and beauty” and “listen with empathy,” especially when it comes to “historically marginalized and underrepresented voices.” 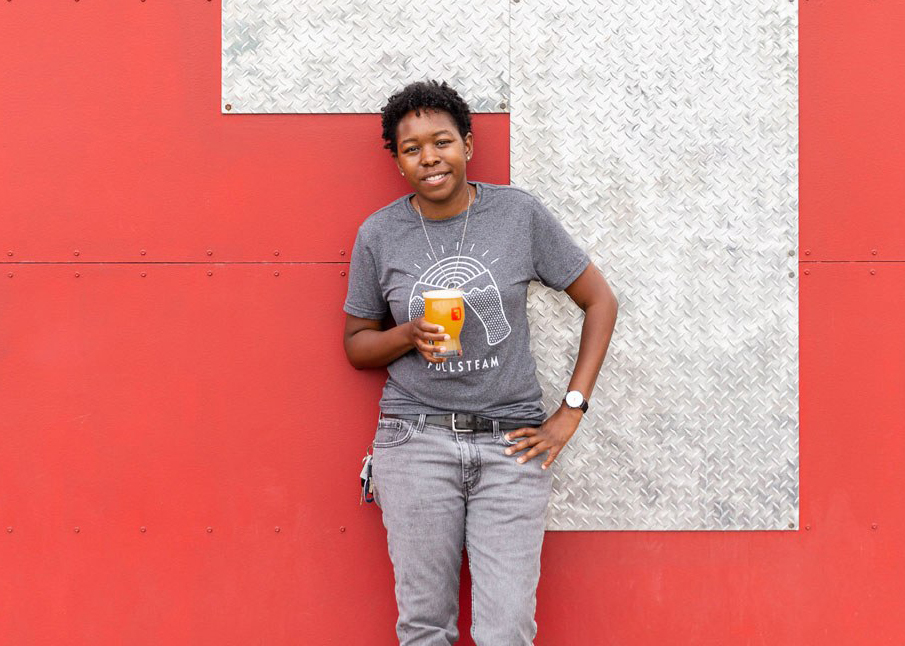 Today, much of the brewery’s efforts on behalf of those voices falls to Ari Sanders (pictured above), Fullsteam’s Director of Tavern Operations. How does she build a following that mirrors the populace of Durham, a city whose old tobacco economy has been replaced with IT, research and cleantech industries?

For starters, Sanders says, “We try to be very intentional about each bartender bringing their unique personality to the shift. We give our staff freedom in things like music choices and dress code, so that most visitors see themselves reflected in our staff and in the music they hear.”

“We also have inclusive bathroom signage,” she says, “and we encourage staff of all orientations and gender expressions to be their full selves at work.” The Fullsteam team also makes sure to walk its on-the-job talk. “We make it pretty easy to tell what we’re about,” Sanders notes, “with our enthusiastic support of social and environmental issues, and amplifying voices other than our own amidst social turmoil.” After all, she notes, “Only the ‘F’ in our logo is backward”.

To keep things leaning forward, Sanders employs a thoughtful use of music. “Many breweries,” she says, “aren’t very intentional in things like background and live music, and it results in a rather homogenous experience. I go out of my way to book acts of different races and gender expressions.”

She bolstered the music’s effectiveness by investing in better sound gear for Fullsteam’s 80-seat restaurant/listening room, and upping the pay for its music artists. The higher pay expanded the options for live acts, and the equipment made it possible to present much more than the typical solo guitar act. (Due to COVID-19, Fullsteam’s live music has been scaled back for now.)

Sanders also sought collaborative allies with their own diverse audiences, including Durham Beat, a budding cultural magazine that was given space for a monthly, curated, no-fee artist market. “It greatly widened our reach,” Sanders notes, “and boosted our reputation as a good place for artists to perform and hang out.” The Beat Markets are now Fullsteam’s most successful weekend night each month.

For breweries looking to reach a wider demographic and join the conversation about racial justice and opportunity, Sanders thinks breweries have to answer two tough questions:  Do you sincerely want a more inclusive beer trade? Are you willing to take meaningful steps to make it happen?

Such an approach is key for breweries that are part of an area’s redevelopment. “If we’re going to be these precursors of gentrification,” Sanders says, “the responsible thing to do is include the humans already in the neighborhoods that we’re invited into.”

That new sort of “local” thinking is vital for craft beer to fully open its arms to others.  “True progress,” Sanders says, “is made on the ground, on the very streets where breweries are located. When breweries think of themselves, first and foremost, as good neighbors, they’ll naturally unite with their neighborhood and the struggles of those around them.”